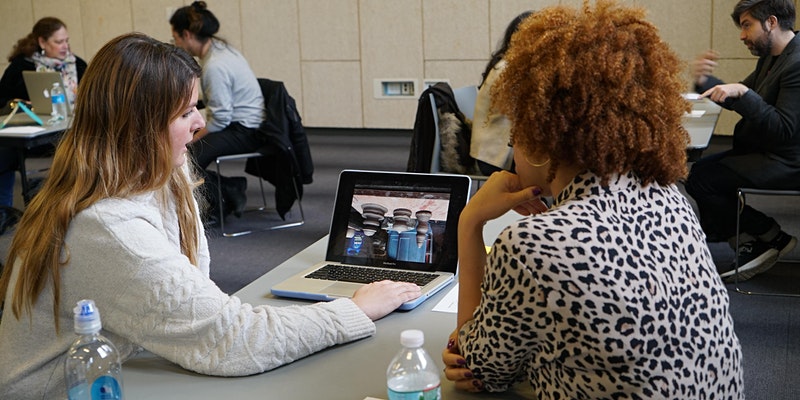 The virtual portfolio review is currently sold out. To be placed on the waitlist, please email Kristen J. Owens at ko259@newark.rutgers.edu with the time slot(s) you are interested in. You will be notified if a space opens up.

Paul Robeson Galleries portfolio review session provides artists with an opportunity to get feedback on their work from industry professionals. Feedback may relate to aesthetics, an artist’s work and its presentation, general advice about career management and feedback on their portfolio websites. At the end of the review day, four artists will be selected to present their work during a virtual artist talk.

Each artist will receive a maximum of two 20-25-minute one-on-one portfolio review sessions.

Once a portfolio review session is confirmed, selected portfolio works must be submitted via THIS FORM by Monday, November 15th at 11:59pm.

Nana Adusei-Poku (PhD)  is Associate Professor and Luma Curatorial Fellow at the Center for Curatorial Studies and Contemporary Art at Bard College. She was previously Visiting Professor in Art History of the African Diaspora at The Cooper Union for the Advancement of Science and Art in New York City. She held the position Research Professor for Cultural Diversity  from 2013-2014 and then for Visual Cultures 2015-2017 at the Hogeschool Rotterdam with affiliation to the Piet Zwart Institute and the Willem de Kooning Academy and was Guest Lecturer in Media Arts and Master Fine Arts at the University of the Arts, Zurich from 2012-2018. She received her PhD from Humboldt University Berlin for her thesis on post-black art as part of the Graduate program called “Gender as a category of Knowledge”, following degrees in African studies and gender studies at Humboldt University, and in media and communications at Goldsmiths College, University of London. She has been a visiting scholar at the University of Ghana, Legon; the London School of Economics; and Columbia University, New York.

Jeanne Brasile’s curatorial practice is focused on working with emerging and mid-career artists in non-profit venues.  She is particularly engaged in developing exhibitions outside the white cube.  Her inter-disciplinary curatorial practice is uniquely informed by her roles as a Gallery Director, museum educator, professor, curator, art writer and artist. She is most interested in developing exhibitions that engage non-traditional audiences while concomitantly challenging viewers to re-think their perceptions about art, art-making and the role of the museum/gallery.  Brasile is currently the Gallery Director at Seton Hall University’s Walsh Gallery where she regularly curates in the physical space of the gallery as well as on virtual platforms. She is also an independent curator, recently working on social interventions and public video screenings in collaboration with Index Art Center of Newark, Gardenship Art in Kearny, New Jersey, The Long Island Museum of Contemporary Art, The Dreamers Art Project in Rome and New York City, SITE Festival/Arts in Bushwick and Newark’s Military Park. She has contributed essays and reviews to the Brooklyn Rail, AS | Mag, Korean News Daily and Brick City Live. Jeanne Brasile earned her B.A. in art history/studio art from Ramapo College of New Jersey and her M.A. in Museum Studies at Seton Hall University.

zakkiyyah najeebah dumas o’neal makes work to further understand how the specificity of her own lived experiences are connected to historical and contemporary movements that involve embodied knowledge production. She explores this through social portraiture, video assemblage, collage, drawing, and found images. She seeks to reinforce a different kind of gaze (and gazing) which she processes through empathy, desire, love, queer identity, family, intimacy, illegibility, and poetics. Within her projects there’s an overlying theme of trying to make sense of what and who she belongs to.  zakkiyyah has been included in numerous group exhibitions and has had several solo exhibitions at Mana Contemporary, Blanc Gallery, and South Bend Museum of Art. She has also curated exhibitions at spaces such as Chicago Art Department, Blanc gallery and Washington Park Arts Incubator at the University of Chicago. She recently held the 2019- 20 Jackman Goldwasser Residency at the Hyde Park Art Center, Chicago. She is currently an Artist in Residence at University of Chicago’s Arts and Public Life initiative, and Visiting Artist in Residence at Indiana University in Bloomington, IN. zakkiyyah is also a Co-founder of CBIM (Concerned Black Image Makers): a collective of Black artists, thinkers, and curators that prioritize shared experiences and concerns by lens based artists of the Black diaspora.

Ulysses Williams is a native of Jersey City, NJ and currently resides in Harlem, NYC. He earned a Bachelor of Science Degree in Business Administration from Saint Peter’s College which is currently known as Saint Peter’s University. Upon Graduation held several positions at Saint Peter’ College including the position of Director of The Institute for the Advancement of Urban Education (IAUE) where he managed federally funded grant programs that provided academic programs for elementary students, college preparatory classes for high students and distance learning courses for adults returning to college to complete their college requirements.  He left academia to join the fashion and entertainment industry as an Account Executive for a multi-line showroom in New York City’s Garment District where he represented high end women’s wear designers as well as management positions for luxury brands such as Shanghai Tang, Stephane Kelian, Jimmy Choo and Seven for All Mankind.  Ulysses Williams is the Executive Director of ArtCrawl Harlem, a non-profit educational arts organization that supports and promotes Harlem’s rich visual arts history and community with an annual art exhibition.