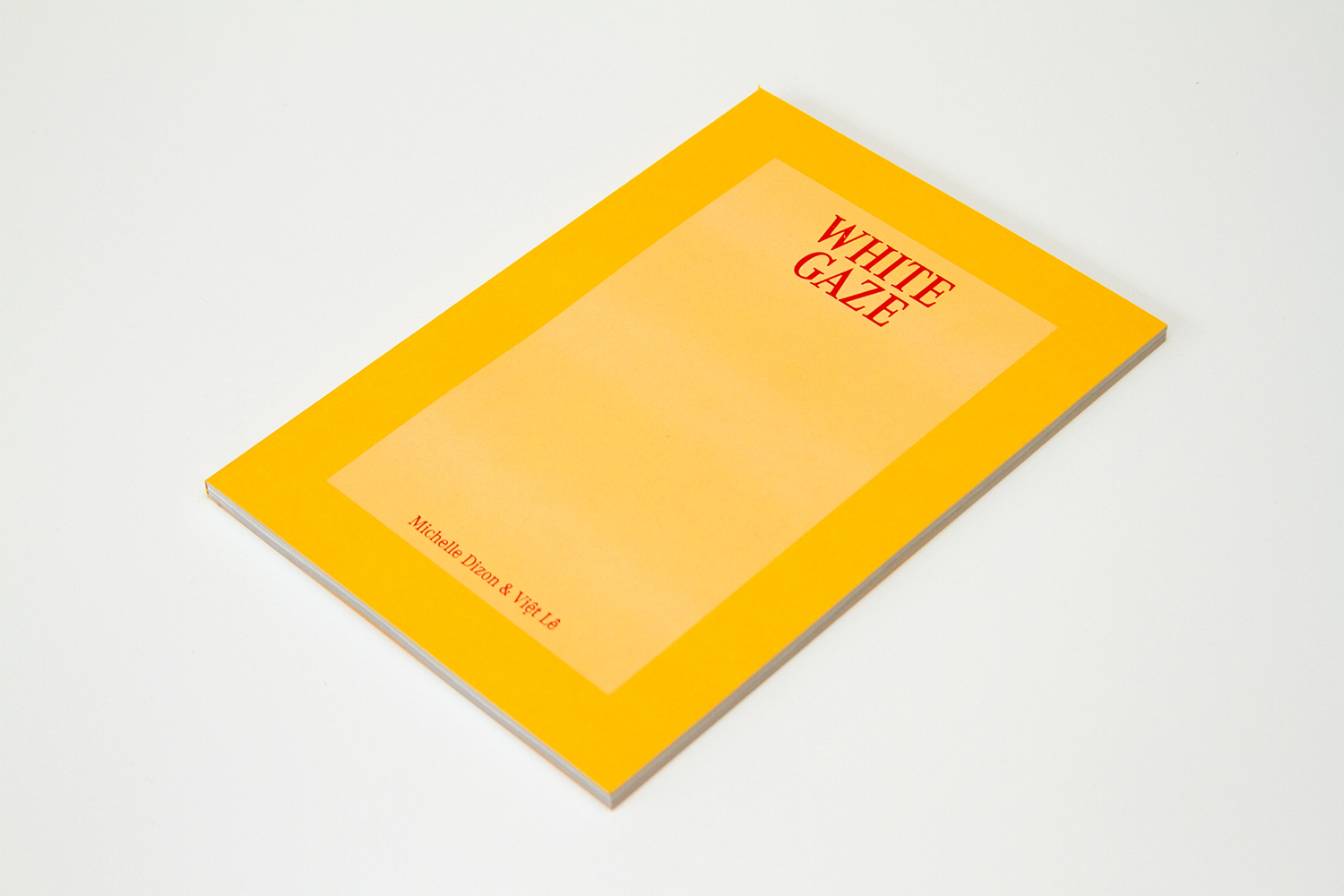 kate-hers RHEE will give Rutgers audiences a sneak peek of her upcoming 2020 project at the university and her current research into wunderkammers in Europe and Asia, as well as her conceptual work which interrogates the intersections of sexuality, language, gender and racialization.

Artist and filmmaker Michelle Dizon works with an archive of National Geographic magazines to explore the mechanics of the “white gaze.” Through a process of poetic subtraction, Dizon works with only the language on the original page to write a decolonial counterpoint to a way of imaging the world centered on the West. Her images lay the white gaze bare, unearth a genealogy of a racist visuality, and work in the gap between image and text to write against the grain of imperialist narratives.

Artist and writer Việt Lê uses Dizon’s images from White Gaze as a starting point for his poetic exploration of the legacies of war and imperialism. Lê’s text performs a dual work, both contextualizing Dizon’s images in the history of empire and unleashing a rhythmic play with language, both visually and aurally, to cut to the core of how meaning is produced. His text speaks to absence as much as a presence with a story of war and empire told in fragments, phrases, words hanging on the page—an index of both the trauma and resistance experienced by those subjected to the violence of empire.

RHEE and Lê remix the text from White Gaze as a performance, an audience call and response, tracing our collective desires and complicities.

MICHELLE DIZON is an artist, writer, filmmaker, and Associate Professor of Media and Cultural Studies at the University of California, Riverside. Her works seize upon freedom in time to assert languages, materialities, and knowledges that unravel the political projects of Western modernity and that hold space for the intimate and complex exploration of lifeworlds that are silenced by power and written out of history. Dizon’s works take place in both the contexts of institutions and grassroots organizing. She has lectured and exhibited across the Americas, Europe, and Asia in significant cultural and educational institutions such as the Center for Feminist Studies in Zagreb, Croatia, School of Oriental and African Studies, London, UK, SalaSab, Bogota, Colombia, Caixaforum, Barcelona, Spain, Jeu de Paume, Paris, France, The Cooper Union, NYC, NY, Vargas Museum, Manila, Philippines, Para/Site Art Space, Hong Kong, China, the Gothenburg International Biennial for Contemporary Art, Gothenburg, Sweden, and the Singapore Biennial.

Born in Seoul, South Korea and raised in a racially segregated, working-class suburb of Detroit, Michigan, kate-hers RHEE’s interdisciplinary work reflects the complex nature of miscast identity, cultural dislocation, and gendered interactions. She uses language, food, and beauty practice as art mediums to explore transnational identity and the construction of self. She received her BFA from the School of the Art Institute of Chicago and her MFA from the University of California – Irvine, where she was a Graduate Studies Diversity and Jacob K. Javits fellow. She works in Germany, the United States and South Korea and established her studio in Berlin in 2009. RHEE’s work has been shown nationally and internationally with recent exhibitions and interactive projects at the British Museum – London (2016), Asian Art Museum – Berlin (2016-2017), Neuer Berlin Kunstverein (2016) Group Intervention Video – Montreal (2015), Künstlerhaus Dortmund (2015), Humboldt Lab Dahlem Museum – Berlin (2015), Korean Cultural Service – New York (2015), and the Berlinische Galerie – Museum for Modern Art (2014).