Rap on Race with Rice 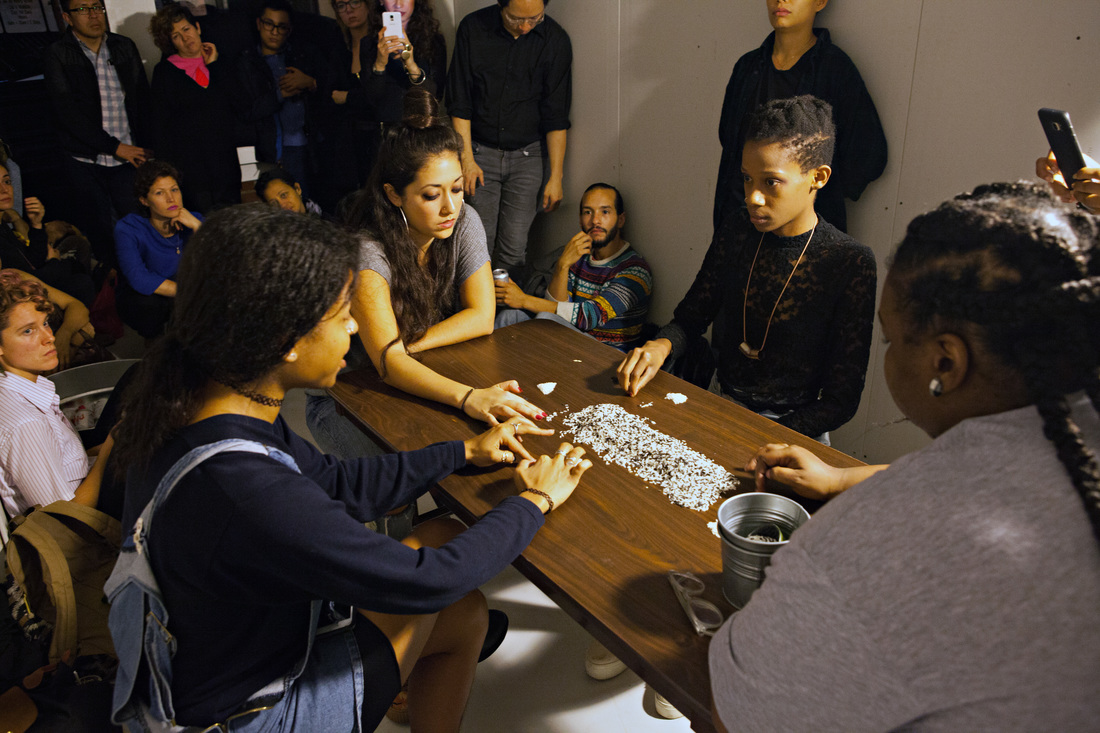 Dominique Duroseau, A Rap on Race with Rice, performance, part of Your Decolonizing Toolkit: An Evening of Performance Art at Maw, New York, October 21, 2016

This two-part multi-artist performance aims to spark conversation and engage spectators to identify bias, prejudice, discrimination, and racism. The artists are tasked with separating black and white grains of rice as they discuss issues related to race and ethnicity. The audience is encouraged to be active witnesses to discern their own thoughts on the different topics and issues.

Dominique Duroseau is an interdisciplinary artist, whose practice explores themes of racism, socio-cultural issues, and existential dehumanization. Her exhibitions, performances, and screenings include SATELLITE ART and PULSE Play in Miami; The Kitchen, The Brooklyn Museum, El Museo del Barrio, A.I.R. Gallery, BronxArtSpace, Rush Arts Gallery, and Smack Mellon in New York City; The Newark Museum, Index Arts, Project for Empty Space, and Gallery Aferro in Newark, NJ. Her recent exhibitions and talks include: solo at A.I.R. Gallery in Brooklyn, a panelist at Black Portraiture[s] at Harvard and a lecture at Vassar. She was a fellow at A.I.R. Gallery in Brooklyn, has received artist residencies from Gallery Aferro and Index Art Center and recently was accepted to the Wassaic Project and Shine Portrait Studio. Duroseau holds a Bachelor’s in Architecture, New Jersey Institute of Technology, and a Master of Fine Arts, Kean University.

Michael Paul Britto graduated with a BA from the City College of New York. Michael’s works range from videos to digital photography, sculpture, collage, and performance. Britto has had residencies at the New Museum in New York as well as Smack Mellon, The Marie Walsh Sharpe Foundation and LMCC. Michael was been featured in shows at El Museo del Barrio, The Studio Museum of Harlem, The Zacheta National Gallery in Warsaw, The Kitchen, The Schomburg Center for Research in Black Culture, and the Victoria and Albert Museum in England. Britto has been written about in The New York Times, Art In America and the Brooklyn Rail.