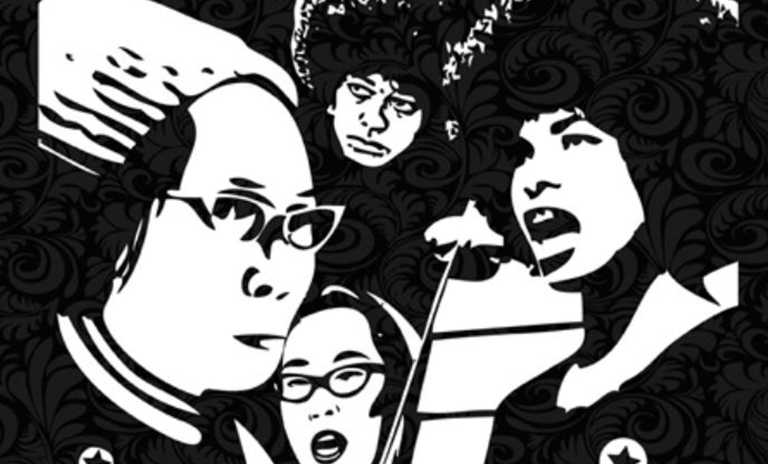 Join us for a film screening of Mountains Take Take Wing: Angela Y. Davis and Yuri Kochiyama, A Conversation on Life, Struggles & Liberation. Internationally renowned scholar, professor and writer Angela Davis and 89-year-old grassroots organizer and Nobel Peace Prize nominee Yuri Kochiyama spent over a decade conversing intimately about personal histories and influences that shaped them and their overlapping experiences.

The screening will be followed by a conversation between feminist activist Jillian Montilla and =SPACE community manager Kelly Outing, moderated by Taliyah Williams, an emerging public health scholar specializing in racial healthcare disparities.

This program is organized in collaboration with Women in Media-Newark and the Zimmerli Art Museum. The exhibition Angela Davis – Seize the Time is on view at the Zimmerli until June 15 ,2022.

Registration is required. Zoom details will be sent via confirmation email.

Woman In Media – Newark is an organization that educates the public about issues affecting the lives of women using film, video and new media as our platform. Merging culture and academia, we rally behind our sisters who courageously struggle to assume leadership roles in the film industry with their conscious effort to present a balanced image of women, dispelling the stereotypes, and changing public perception of their sisters worldwide.

Jillian Montilla is a feminist and activist. As the 2020 UN Women Youth Spoken Word Poet, Jillian strives to reclaim the creative power of language to sustain her pursuit of a gender- and racial-equitable world. She is a master’s candidate in Human Rights and Humanitarian Action at Sciences Po. Here, she works with a student collective called Pour Nous (in English, “For Us”) which advocates for intersectional praxis in higher education. She was also a consultant with Sciences Po PRESAGE (gender studies research center), working on a project to enhance political participation for young migrant and refugee women.

Kelly Velicia Outing is the community manager of =SPACE, where she works tirelessly to provide resources and opportunities for multicultural founders, LGBTQ ventures, and women-led startups. She is passionate about social issues and is working hard to become an activist. And a political figure who works with individuals who are affected by poverty, racism, discrimination, poor education and other social issues. She is a writer, activist, and full-time geek; so don’t be afraid to hold up the Vulcan salute when you meet her.

Taliyah Williams is a student at Northeastern University in Boston, MA studying Health Science with an interest in Public Health. Her research in public health specializes in racial healthcare disparities and its effects on Black women with breast cancer. She is also passionate about racial justice and equity in education in the medical field.