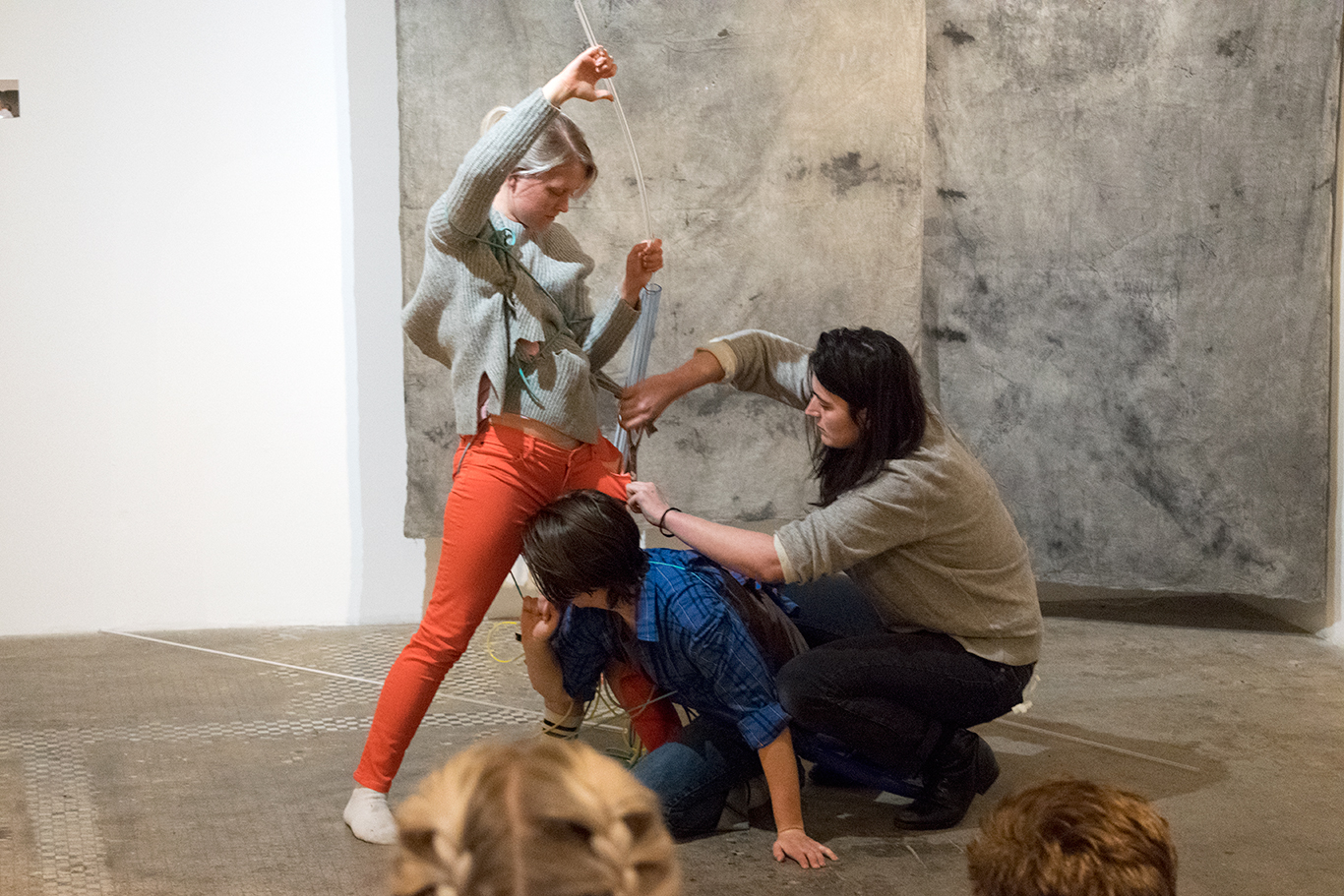 Please join us on Thursday, September 26th for a performance held in conjunction with the exhibition, Object Lessons.  Lizzy De Vita’s sculpture included in the exhibition, Slang, 2017 was created during an improvised dance, entitled Tourniquet. We are pleased to present a new iteration of the performance.

Two lovers carry on a conversation. This conversation is not only verbal (intimate and sometimes banal exchanges of words), but also physical (using improvisation and familiar touch) and material (implementing objects: human and material). De Vita cuts in, creating “accommodations” to help them maintain difficult positions. As these makeshift prosthetics assimilate into their physical vocabulary, does it change the way we see their ability and inter-dependency? The pair continues to shift and change positions in relationship to each other and the objects. How then do prior accommodations rendered obsolete or turn into obstacles? In turn how are they re-adapted into the “conversation”?

Kirstin Dahmer is a co-owner and instructor at IncrediPole, a pole dancing studio in Greenpoint. Go take a class, it’s very fun. She has previously worked with Lizzy DeVita as a model/mover in a performance collaboration with the fashion brand KEENKEE.

Lizzy De Vita (b. 1986) is an artist, writer, and educator who lives and works in Brooklyn. De Vita’s work occupies a constellation of media, including performance, text, sound, drawing, installation, video and sculpture. Diverse in form, the work is unified by an underlying interest in viral moments: places where the boundaries between ourselves and others are blurred. De Vita earned her BA in Art History and English Literature from Barnard College and her MFA in Sculpture at Yale.

Erica Ricketts is a performer/choreographer/sound designer currently based in Brooklyn. Before moving to New York, Ricketts lived in Chicago where she received a BFA in dance making from Columbia College Chicago. Her work was shown at various venues around the city including DePaul University, Stage 773, and the Hamlin Park Fieldhouse. In addition to Chicago, her work has been performed in Detroit (Detroit Dance City Festival), Minneapolis (ACDFA), various cities across Austria (Young Tanzsommer Festival), and most recently in NYC (Movement Research at Judson Church). Ricketts has had the pleasure of performing with Katy Pyle/Ballez, Joshua Kent, Greer Dworman, Lizzy DeVita, Emily Johnson/Catalyst, Brendan Fernandes and Ash Yergens. She has provided sound design for works by Joanna Furnans, Annie Rudnik, Emily Loar, Project Bound, and Hedwig Dances.