The Remedy: Film Screening and Conversation 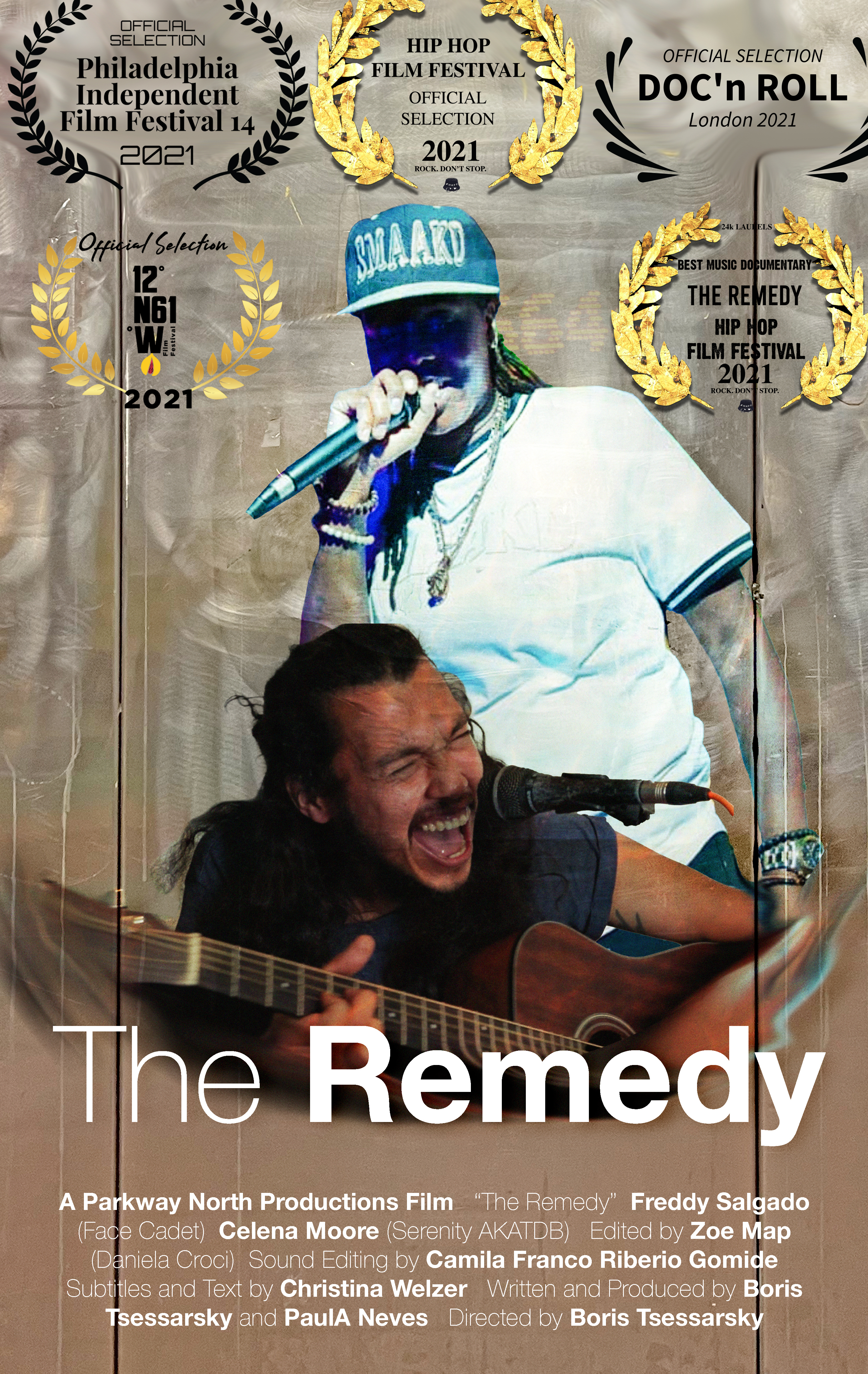 Join us for a film screening of The Remedy, a profile of two New Jersey based hip-hop artists, Freddy Salgado (Face Cadet), a self-taught musician and Ecuadorian immigrant, and Serenity AKATDB, a queer African American woman who’s carved a career in a male-dominated genre while battling lupus and a turbulent family history. Following the screening will be a conversation between the filmmakers, Boris Tsessarsky and paulA neves of Parkway North Productions, and the artists.

Visitors must wear face coverings and maintain a safe distance from others while inside. Visit Rutgers Operating Status Update for all other campus conditions.

Although Brooklyn born, Serenity AKATDB was raised in Newark, New Jersey. In and out of the foster care system by the age of 10 and adopted by 13, Serenity took to the streets at age 15 for survival. Enduring the highs and lows of being shot, stabbed, kidnapped, consumed with suicidal thoughts and facing extreme incarceration birthed an internal advocacy that would shapeshift into the voice of the voiceless. Diagnosed with the autoimmune disease, lupus, Serenity has had quite a few battles with flare ups yet her resilience keeps her motivated. Believing that the lack of knowledge and encouragement imprisons the mindset, the task of overcoming her plateaus was mostly done alone. That same energy fueled her platform for those with lupus, the unencouraged individual, and to thrive as a member of the LGBTQ community.

Music has played an integral part of Serenity’s life since the indelible age of 5. Performing was a necessary form of therapy for her once she retreated into herself to learn how to process her pain due to the lack of guidance and repeated trauma. Fast forward into her timeline and you will witness that Serenity has revamped her message to the world and has created a more definitive path by carving out a brand that is more conducive to true understanding of self. Not only is she gearing up to release new music to her award winning and diverse catalog, she has a non-profit in process, MAKE THE HURT COUNT, to assist the chronic illness warriors of the world continue pursuing their dreams, a docuseries with a comprehensive look at her transformative years, as well as the owner of a mobile commercial fleet and car repair service, TECH ON THE WAY.

Freddy Salgado (Face Cadet) was born in Hell’s Kitchen New York. Born of Ecuadorian heritage, Freddy spent every summer there until the age of 17. A country made of heart and soul, Ecuador continues to be the source of Freddy’s simpatico. His fascination with music and instruments began as a child in the choir, and when his mom bought him his first guitar at age 14. In his sophomore year of high school, Freddy joined his first band, Relative 2 Nothing.

The band morphed into Just Stand There, heavily inspired by the members’ favorite bands Say Anything, Brand New and Taking Back Sunday. It is during this time that Freddy began to take his music more seriously and his lyrics came to reflect the world he saw around him. While living in San Diego, California in 2013, a coworker overheard him freestyling and offered to introduce him to his friend who had a studio. Impressed by his work, Freddy’s coworker decided to sponsor his first few songs and it was there that he was able to create the foundation behind FACE CADET.

A New Yorker and Russian immigrant who grew up in the 80s and 90s, Boris Tsessarsky was deeply immersed in underground hip-hop culture. After receiving his MFA from Sarah Lawrence College, Boris wrote and directed his first film—the award-winning short documentary King’s Highway: The Story of Malcolm Fairfield (2016). In 2018, Boris co-founded—along with paulA neves—Parkway North Productions. Boris directed and co-produced with paulA the feature length hip-hop documentary The Remedy (2021), which has screened at several festivals, including the 2021 Philadelphia Independent Film Festival, 1261 Film Festival, and the 2021 Harlem Hip Hop Film Festival where it was awarded Best Music Documentary. Follow him on Instagram @btsessarsky and @parkwaynorthproductions.

paulA neves, a Luso-American writer, multimedia artist, Newark native, and recipient of the 2020 NJ Poets Prize from the Journal of NJ Poets, is the author of the chapbook, capricornucopia: the dream of the goats (Finishing Line Press 2018), and the co-author of the poetry/photography collection, Shirts & Skins (Shine Portrait Studio Press 2017). paulA has exhibited multimedia/visual art at The Newark Museum, the National Council on Aging, Black Box Gallery (OR), Rutgers University, and elsewhere. paulA is the co-founder with Boris Tsessarsky of Parkway North Productions, which produced the award-winning documentary The Remedy about two NJ hip hop artists/musicians that has received laurels from the 2022 Garden State Film Festival, the 1261 Film Festival (2021), Harlem Hip Hop Film Festival (2021) and Philadelphia Independent Film Festival (2021). Previously paulA and Boris produced Every Alien Pen, a short filmed in Branch Brook Park which re-interpreted Shakespeare’s Sonnet 78 with a contemporary urban sensibility and was a selection at the NYC Independent Film Fest. paulA’s cross-disciplinary work often focuses on work and working, family, artists and their communities, identity, (dis)placement, eco-justice, spirituality, and immigrant forebears whose sacrifices have made much possible. Follow on Instagram @itinerantmuse and @parkwaynorthproductions or visit paulaneves.net.