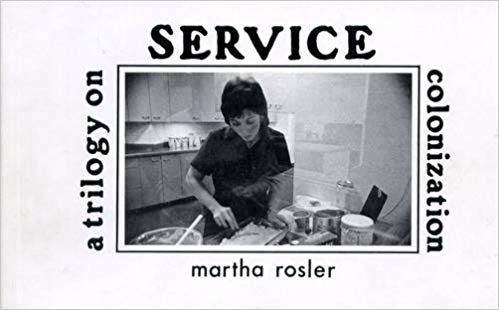 Martha Rosler, Service: A Trilogy on Colonization, 1978. Black and white commercially offset printed book with photographs and text, 5 x 8 in.

Martha Rosler is a Brooklyn based artist who works in video, photography, text, installation, and performance. Her work addresses matters of the public sphere and landscapes of everyday life and how they affect women. Rosler is an eminent artist with a contemporary critical voice within feminist discourses. Rosler has produced many works on war and national security, connecting life at home with the conduct of war globally, in which her photomontage series played a critical part. In 2004 and 2008, in opposition to the wars in Afghanistan and Iraq, she went to reinstitute her now well-known series of photomontages House Beautiful: Bringing the War Home, made as a response to the war in Vietnam in the late 1960s. Her works have been published in several books as well as many public spaces such as airports, roads, and public housing.[1]

Rosler continues to live and work in Brooklyn NY. She attended the Brooklyn College of the City University of New York and the University of California, San Diego, where she received her BA and MFA respectively. She has had solo exhibitions at various institutions, internationally and in the US, including; the Museum of Modern Art, New York (2012); The Centro José Guerrero, Granada, Spain (2009-10); the Centre Pompidou, Paris (2000), and many more. She has been included in numerous group exhibitions at institutions all around the world. Rosler has published 17 books on photography, art, and writing, in several languages. She received the Guggenheim Museum Lifetime Achievement Award in 2010. [2]

Martha Rosler’s works focus on themes of entitlement and dispossession, as well as on the contrast between the domestic lives of women and war, repression, and politics. Her writing and photography on infrastructure, including roads, air transportation, and subways, address urban planning and architecture, from housing to homelessness and the built environment. She uses a variety of media but is best known for her previous work with photo-collage and photo-text. Rosler has stated, “Video itself ‘isn’t innocent, yet video lets me construct, using a variety of fictional narrative forms, ‘decoys’ engaged in a dialectic with commercial TV.” These concepts she is referring to are present in many of her works, especially in Semiotics of the Kitchen (1974/75), in which a static camera is focused on a woman in a kitchen who interacts with kitchen utensils, naming and demonstrating them with odd gestures and speaking to the expectations of women in certain domestic spaces.[3]

Rosler describes the “rah rah” attitude of the American media and politics that reminded her of the political manipulations of the past. Her series of photomontages in Body Beautiful, and in Beauty Knows No Pain (1965/72), address the photographic representation of women and domesticity. These works are concerned with the geopolitics of entitlements and dispossession. Her writing and photographic series on roads, and urban undergrounds such as subways or metros join her other works in addressing urban planning and architecture, from housing to homelessness and the built environment, and places of passage and transportation. Much of her work also focuses on antiwar and feminist ideologies. Rosler’s art inserts domestic and private themes into the public sphere in order to make political, social, and instructional critiques.[4]