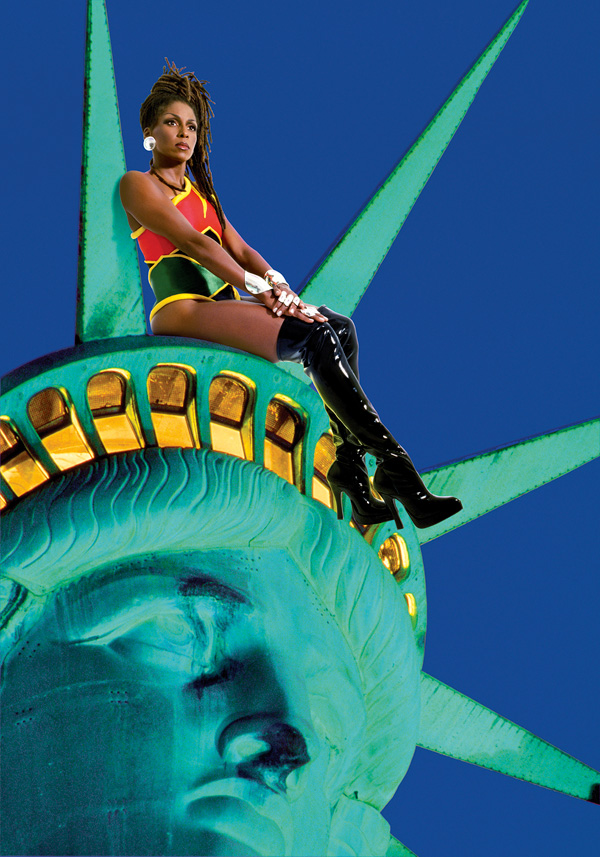 Renee Cox works in photography, photocollage, and mixed media installations. Her work centers around “taking the stereotypical representations of women and turning them upside down, for their empowerment.”[1] Cox studied photography at Syracuse University and received her Master of Fine Arts degree at the School of Visual Arts, New York in 1992. Subsequently, Cox participated in the Whitney Independent Study program. Cox later became an editorial photographer for ESSENCE magazine. In her early thirties, Cox made the transition from magazine to fine art photography.

From her early work, Renee Cox presented social issues in a raw and visceral way that polarized audiences. This marriage of distinct style and subject cemented her as one of the most controversial Black artists working today. Her mixed media piece, It Shall Be Named (1994), shows a Black man’s distorted body made up of eleven separate photographs hanging from a cross, positioned to resemble a lynched man as the crucified Christ. Later in her work Cox would often use her own image. The artist once said, “The main inspiration for my work comes from my life experiences. I use myself as a conduit for my photographs because I think that working with the self is the most honest representation of being. I am working toward regaining a ‘self-love…’.”[2]

With her work rooted in both Blackness and feminism, in the mid-1990s Cox began one of her most contentious bodies of work to date. In the series, Flipping The Script, Cox took many European Christian religious figures and re-imagined them as Black people. The spark of the controversy would be her photo, Yo Mama’s Last Supper (1996): Cox remixed Leonardo Da Vinci’s Last Supper (circa 1490s), with a nude Cox sitting in for Jesus Christ, surrounded by all Black disciples, except for a white Judas. In 2001, this work ignited a maelstrom of controversy when it was shown in the exhibit, Committed to the Image: Contemporary Black Photographers at the Brooklyn Museum. Many Roman Catholics were outraged by the photograph. The photo garnered the attention of Cardinal Egan of the New York Archdiocese and New York City Mayor Rudolph Giuliani. Mayor Giuliani called for the forming of a commission to set “decency standards” to keep such works from being shown in any New York museum that received public funds.[3] Events such as this are a testament to Cox’s dedication to truth through art and the pushing of societal norms for the sake of greater understanding.